You are here: Home / 2010 / Alizee Sery (not the ulluru rock australia strip)

Alizee Sery, 25, stripped down to a white bikini after climbing the central Australian monolith, formerly known as Ayers Rock, in what she described as a tribute to Aboriginal culture.

A woman who performed a striptease on top of Australia’s giant red rock Uluru on Sunday prompted a renewed call for people to be banned from climbing the important indigenous site, a report said.

But Sery, who is reportedly French-born, said: “After such a hard climb, when you reach the top, the view and the magic of the place gives you an amazing feeling of peace and freedom. You want to sing, dance — and strip.”

Visitors are asked not to climb the rock because of its cultural significance to Aborigines but thousands do each year.

Ayers Rock/ Uluru, the world’s largest monolith and an Aboriginal sacred site is Australia’s most famous natural landmark. Kata Tjuta National Park: 280 miles (450km) southwest of Alice Springs. Visitors may wish to make the tough 1.6km ascent to the top or take a walking tour around the rock with an aboriginal guide , learning about its fascinating with the Uluru people and its importance in dreamtime legend.

36 dome-like rock formations which stand up to 1,701ft (546m) high and cover an area of 35km and like Uluru, produce an incredible light show at sunset, with crimsons turning to rusts, and pinks to mauves. 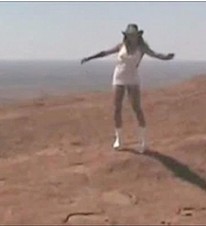 A FRENCH-born dancer who stripped on Australia’s most sacred rock should be deported from the country immediately, according to traditional landowners.…