In Australia, where Google Street View cars and trikes can’t get to remote areas of the continent, Google says it’ll use kangaroos with mini-cameras mounted on their noggins to photograph the Australian outback. 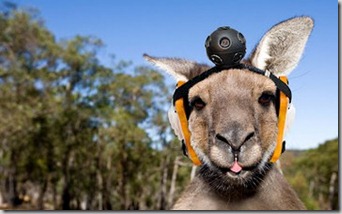 They’re calling it Google Street Roo, Hopefully the 10,000-plus kangaroos doing the job  won’t mistakenly collect any personal data via wifi while they’re hopping across Australia.