The date is Friday May 28th , when the iPad will also launch in Australia along with Canada, France, Germany, Italy, Japan, Spain, Switzerland and the UK. Pre-orders can be placed at Apple.com.au from Monday, 10 May, with the device available from Apple’s online store and retail stores plus selected Apple resellers. 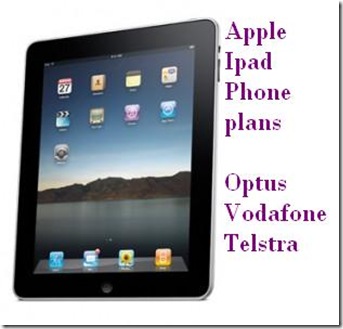 The competition between telecommunication carrier’s for a piece of Apple’s iPad action has begun, with Optus putting flat month-by-month 3G plans as well as prepaid plans on its iPad menu.

Optus has confirmed to APC that it will offer a ‘made for iPad’ microSIM bundle with three month-by-month plans: $20 for 2GB, $30 for 3GB and $60 for 8GB. "Optus will also have prepaid as well as month-to-month data plans suitable for use with the iPad 3G" Optus spokeswoman Liz Greene told APC, with the promise that "we will provide further details of our iPad plans soon."

Earlier today Telstra revealed its prepaid iPad Next G plans which cost $20 for 1GB, $30 for 3GB and $60 for 6GB on top of the initial $30 ‘Pre-Paid SIM for Apple iPad’ start kit which comes with 1GB (and a bonus 2GB if activated before June 30th). Telstra has not yet revealed if it will also offer month-by-month plans

VHA partner networks Vodafone and 3 have revealed they will offer a range of mobile broadband plans for the 3G iPad.

The new Month by Month plans offer the value of a contract with complete flexibility of not being locked into a long term commitment.

Available on both Vodafone and 3, mobile broadband can be purchased for as little as $15 per month. This low monthly cost allows the download of 1GB of data. The Month by Month plans are also available at $29 (3GB), $39 (6GB) and $49 (8GB). Customers also have the option to either ‘BYO’ their own broadband modem or purchase a stylish USB modem internet stick for the low one-off cost of $79.