The cell phone is something that has evolved beyond recognition in recent years thanks to the developments in technology and the features now available.

Cell phone- From Brick to slick 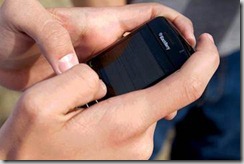 Originally, and we’ve all seen the pictures, there was “the brick”, that huge lump of plastic with a 6-foot aerial that allowed you to make and receive calls and that’s it. Today, they are tiny little things that even allow you to programme your satellite TV system to record a show.

As time goes by, all gadgets are only going to improve as developers find new and exciting things to add to the packages. In recent years we’ve seen the likes of Twitter and Facebook built in to the standard features, as well as the likes of HD cameras, the ability to seamlessly stream music and movies from the Internet on your phone and even “mobile wallets.”

These are one of the latest features to hit the cell phone industry and are being pioneered by the likes of Barclays. Cells are already a three-in-one camera, phone and computer, and now it looks like they’re going to become wallets too.

Barclays are trying out contactless payments by creating chips that can be placed within or on the back of a phone, allowing the user to scan their phone against the payment machine instead of having to carry around cash or credit cards.

At present, users will only be able to make payments priced at $25 or under, but, if successful, that could rise to nearer the $40 mark and beyond. Big chains such as McDonalds are already offering customers the chance to pay wirelessly and they have said that the scheme “definitely looks like a winner.”

The more innovations that a cell phone can have, the better the chances are of the company selling their phones around the world. At present, the iPhone is leading the way from the likes of the Samsung Galaxy and the BlackBerry.