Whoever thought a South Korean  fella PSY ( short form for psycho) would take the world by storm  with his catchy , wicked weird full of energy Music Video.

“Gangnam Style” the music video released by PSY on you tube has  gained worldwide popularity  instantly with the song  blazing to the top of the charts in many  English speaking countries, even though the song is in KOREAN. 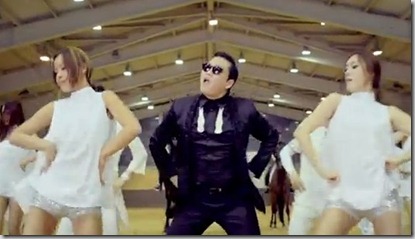 From Wikipedia, the free encyclopedia

“Gangnam Style” (Korean: 강남스타일, IPA: [kaŋnam sɯtʰail]) is a 2012 Korean pop single by the South Korean rapper PSY. It is praised by some for its humor, catchy rhythm[1] as well as PSY’s unusual dance moves. The song was released on July 15, 2012, when it debuted at number one on the Gaon Chart.[2] The music video has been viewed over 235 million times as of September 21, 2012,[3] making it YouTube‘s most watched K-Popvideo.

The video by PSY has got 236,843,378 hits so far and continues to burn the international charts

4. How to “Gangnam Style” Dance Tutorial VIDEO with PSY and Michelle Park –

K-Pop superstar PSY teaches how to do the horse riding dance from his hit song “Gangnam Style.”

“Gangnam Style” is a Korean language colloquialism that refers to a luxurious lifestyle associated with the Gangnam district,[10] an affluent area of Seoul,[11] where people are trendy, hip and exude a certain supposed “class”.

On September 17, “Gangnam Style” was nominated for Best Video at the upcoming 2012 MTV Europe Music Awards that will be held in Frankfurt, Germany.

As for the all-time most watched YouTube video, that accolade can still go to Justin Beiber, whose 2010 music video for the song “Baby” stands tall at 780,683,863 views.

On September 20, “Gangnam Style” was recognized by the Guinness World Records as the Most ‘Liked’ Video in YouTube History.

Some other videos  with a spoof and parody  are also the obama style(not  that great) , Gangnam Style – USNA Spirit Spot ( AWESOME VIDEO – white boys cant lip sync for shite) and the Minecraft gangnam stylevideo, the Mel B (The X Factor Australia 2012) Does The Gangnam Style Dance With PSY. There are still heaps of videos being made , If you do come across an interesting one do please post a link .Enjoy

Philippine convicts who became famous for dancing to Michael Jackson’s hits have added South Korean spice to their repertoire, with a performance of the popular “Gangnam Style” rap which has received over 258,000 YouTube views.

Bollywood also has got their own Gangnam style Bollywood style video