You are here: Home / PC / Capturing Videos from a Website with Movavi Screen Capture Studio 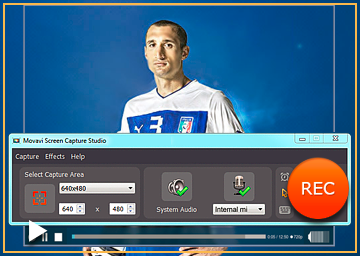 Since Movavi was discovered in 2004 the capture feature has been noted for being its pilot program. It has allowed many users within or without the professional field to use different forms of audios and videos in their desired formats. When you want to capture video from website such as YouTube or DailyMotion you can do the same with the Movavi Screen Capture Studio. Millions of people have since benefited from the videos which range from entertainment, documentaries, short clips or educational videos. There are millions of videos online and you can get some with the software so you can watch later.

Ø It can record numerous types of online streaming videos. You don’t have to worry about the format of the video whether it is recorded from your Skype calls, webinars or other forms of video clips.

Ø The recordings are also done depending on the settings that you choose. Different users have different streaming preferences and so it all depends on one’s own choices.

Ø This software can record on its own. This is one of the reasons why many people like the software so much. When you want to capture video from website you can simply set up a time and let the software do the recording. Once it is done it will stop by itself.

Ø It is able to record video and audio from different sources. You can also be recording audios with the use of a microphone, headphones or MIDI devices.

Ø With the software you can perform video editing with the available built in features. This means that you can remove all the unwanted scenes from the video files. Such video cleanups enhance its clarity and quality.

Downloading Streaming Video from a Site

It is very simple to capture video from website with this software. Install the program and once it has finished installing run it. When the program is running you will see a yellow marking of the area that is supposed to be captured. The window size of the web video can be adjusted so that you can be able to view high definition videos. Basically the size of the web video also matters in determining how you mark your frame. HD videos will require that you play the video in a full screen mode. You will also see a green icon of the system audit so you can click it. You can also choose the “Stop capture after” option and define after how long you want your video to be captured. If you want to start recording you should click the REC button and then view the video streaming. Once you have captured your video from the internet you should click stop button and you will see the captured video on the screen for previewing. You can also click on edit tab to make the necessary changes.

It is always no fun when watching a high definition video as it takes so much time to load especially when your bandwidth is low. Movavi Screen Capture Studio helps solve this problem as it helps you in reviewing videos that are online but are otherwise not for downloading. The software does not only record the video but also any other activity that takes place on the screen. If you want to capture video from website now you have your answer.