You are here: Home / 2012 / DNS CHANGER– Is my computer affected By malware ( Dont lose Internet Access)

A quarter-million computer users around the world could lose  Internet access on Monday 09/07/2012 , due to a malware( or virus ) that has infected computers the world over.

There are fears of a potential "blackout" and describing the Alureon malware as the "Internet Doomsday" virus. These  viruses were designed to redirect Internet traffic through rogue DNS servers controlled by criminals 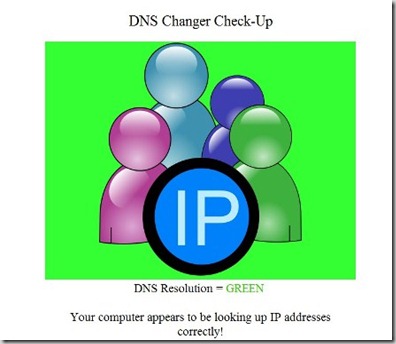 AFFECTED COMPUTERS IN AUSTRALIA, INDIA AND US ON JUNE11th

Because every web search starts with DNS, this virus showed users an altered version of the Internet on thier browsers

Viruses such as Zeus and SpyEye, which infect millions of PCs and are used to commit financial fraud have also been spreading sometimes via the cloud

Information on how to identify and clean up infections can be found on a website that a group of security firms and other experts set up: http://www.dcwg.org.

Check picture above as displayed for clean results