You are here: Home / Apple / Get your daily dose of news with this app

The internet has emerged as an incredible tool for learning everything from Miley Cyrus’ tattoo designs, to the state of politics in the Middle East. 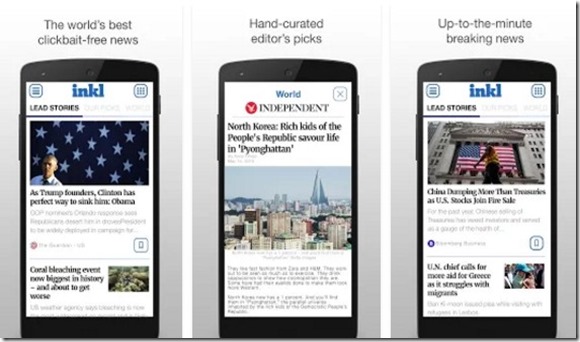 The one problem with this, is that sometimes the information coming at us is way too much. We’ll go to find out what has happened in the news today and there will be hundreds of thousands of news sites vying for our attention. Which leads to the even bigger problem of clickbait – news outlets so desperate to get you to come to their site that they resort to morally scrupulous headlines such as ‘you’ll never guess what happened next!” or “5 things that will shock you.”

This in and of itself is enough to make you want to duck your head away from all the noise, but when you think of how important journalism is to keep us abreast of the serious issues going on in the world, suddenly the situation becomes even more dire.

Enter a new app that promises to solve this problem – inkl. The app inkl provides a wonderful respite from the clickbait and noise of the internet. A ‘clean’ and clear view of the news that really matters, free of trashy non news and misleading headlines.

You have the option to create an account completely free, and it gets access to global publishers such as the Guardian, Al Jazeera, Sydney Morning Herald and more. You can also opt in to their paid tiers – either 10c per article or $15 a month. That gets you ad free access to publishers that traditionally sit behind a paywall like the Washington Post, offline mode, and a whole other host of cool features.

Opening the app, one of my favourite things was the Editor’s Pick section. It contained a bunch of interesting and important news that would traditionally get left aside in favour of the breaking stuff on normal news sites. Playing around on the interface some of the premium features such as bookmarks and news filters, enabling me to block out content or publishers that I don’t want to read.

[ Rating and review of app ]

Overall it’s a pleasantly user friendly app, and something that is aiming to address a serious problem in the world of journalism. I think that especially given the current circumstances in the world, it has never been so important to focus on supporting quality news.