I’m  a avid fan of  music in general  and was pretty pleased to find some of my favorite oldies like “OSIBISA” ( Sunshine Day – OSIBISA) and “Khaled” performing  at the FIFA Soccer world cup  opening ceremony  as well  as one of my favorites R KELLY. Singer and rapper R. Kelly, who enjoys legend status here in South Africa, was joined on stage by the Soweto Spiritual Singers.And just in case you were searching for the results of the first match between south Africa and MEXICO , it was a DRAW

It was a power packed mix of vibrant and infectious music that was played in the opening ceremony FIFA WORLD SOCCER CUP as well as the pre-opening ceremony where “Black Eyed peas” did their thing. The stadium’s design was beautifully replicated in the centre of the pitch with a vast earth-coloured mat accommodating the hour-long display. 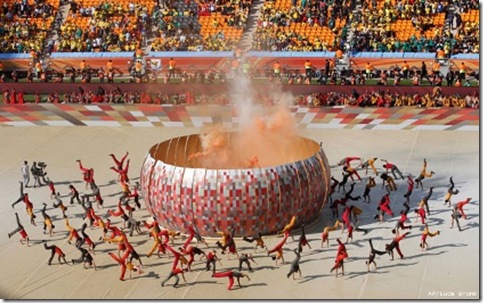 Nobel laureate Archbishop Desmond Tutu danced in the stands, wrapped in a yellow and green scarf and beanie hat to support the Bafana Bafana national side in their later match against Mexico. Algerian pop star Khaled and Nigeria star Femi Kuti  entertained the crowds “ khaled played his hit single DIDI which set  the pace rolling for more good music , With R KELLY wowing the crowds with his song “Sign of Victory” 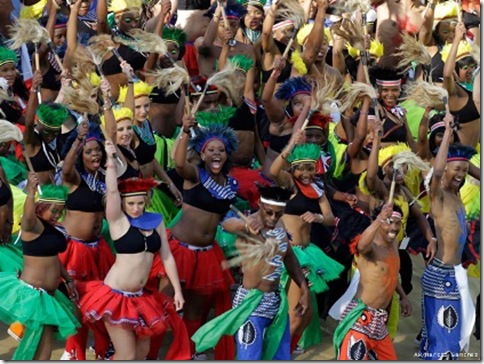